I frequently get questions and referrals related to cone beam scans. Many of which tend to overestimate the power of cone beam. This is a deep subject and usually one that is better discussed in person. But for the purpose of this small entry, I would like to go over the most common misconceptions regarding cone beam scans.

One of the most common requests I get on referrals is to look for a very small findings. Something like a fracture or resorption on a tooth. But in most cases, they are difficult to impossible to see directly.

There are a lot of physics and mathematics involved. Stuff that people much smarter than me understand. The short of it all really comes down to the Nyquist theorem. It basically stipulates that in order for any object to be visible on a cone beam scan, it essentially has to be at least twice as large as the resolution. So if you have a machine that scans at 100µm, then something like a fracture has to be a minimum of 200µm in width. That is if it's aligned perfectly with the pixel grid. More if it's misaligned.

The issue with most root fractures is that they're mostly non-displaced, which means much smaller than the best CBCT resolution. These are hard enough to visualize directly by eye, under microscope, let along through a CBCT scan which is much lower resolution. Of course, that does not mean that we can't evaluate the scan for root fractures. Your radiologist can give some insight.

The story is similar for resorptive defects or decay. Generally speaking, I do not report on decay (it's extremely unreliable). I always try to look for and report resorption. But most scans tend to have artifacts throughout that mimic both conditions. So there tends to be a high degree of uncertainty. My advice if you are looking for resorption, use a small field of view at the highest resolution. It is even better to let your radiologist know which teeth you suspect to have resorption based on your FMX and clinical exam. This is vital information.

In all cases, don't expect either of these to show up easily or at all on a scan... even the best scan. I have personally been looking at CBCT scans since 2009. I have been writing radiology reports on them since 2011 (during residency) and I can assure you, these are some of the most difficult lesions to try and find. Mainly due to CBCT artifacts.

Take a look at the these two images of the same patient and the same area. On the left is a periapical. On the right is a high resolution CBCT scan. The periapical image shows a much sharper image due to its high resolution. Similarly, there is a fractured instrument in the mesial root, at the apical third level. This instrument is visible on CBCT, but not quite so clearly and easily and frequently missed.

But the spacial resolution of the CBCT slice not only shows the bone loss, but also clearly illustrates the pattern of bone loss. Because this area can be viewed in multiple planes as well, it becomes much more helpful to decide the etiology of the dental infection. Additionally, from the periapical you are not sure which canal the separated file is in. On CBCT, you can see exactly which canal it is (in this case mesiolingual).

By any standard, the most common modality is traditional radiographs. In that same sense, digital is also more common than film. It is low radiation, fast, and good sensors will have high resolution and fidelity. A rising star, however, is CBCT. The biggest advantage of which is that it is three dimensional with medium resolution. The third modality, being MRI, is used mainly by TMJ specialists.

So when to choose one over the other? I prefer to keep it as simple as possible and in my own office, I generally follow these rules (there are exceptions).
- Traditional radiographs are still the standard. So this is the base line.
- Take a CBCT scan if it will provide information that you cannot get from traditional radiographs. The main being able to visualize an object in 3D.
- Take an MRI scan if you need to evaluate soft tissues (lesions or articular discs).

The importance of collimation cannot be overstated. I find that more and more offices will scan at the largest CBCT volume available because it's simpler.

One of the issues here is that there is an unnecessary increase in radiation dose to patients. If you are needing to place an implant at a single site, there is no reason to scan the entire head and neck. A small volume CBCT will not only reduce radiation to the patient, it will provide much better detail.

Similarly, there is generally a lower resolution associated with larger cone beam CTs. That means that if you are looking for fine details in a lesion, they may not be visible.

There is also increased liability is associated with larger scans. Simply put, the more stuff to go over, the more there is to miss.

Advantages to collimating your CBCT scans properly
- Reduced radiation to patients.
- Focused field of view, less distractions and liability.
- On most machines, better details due to higher resolution and less artifacts.

- Keep the patient comfortable: straining in the same position can lead to shaking. Fatigue can set in quickly, and even the smallest movement can cause issues.
- Use stabilizers: there's a reason manufacturers have stabilization hardware.
- Ask the patient to close eyes: this is a very simple trick. As the machine rotates around the patient's head, it is very common (and human nature) for the patient's eyes to track the movement. This often leads to minor motion that causes artifacts around the mandibular midline. See the image below where many clients will refer these images to me asking if there is a midline fracture. 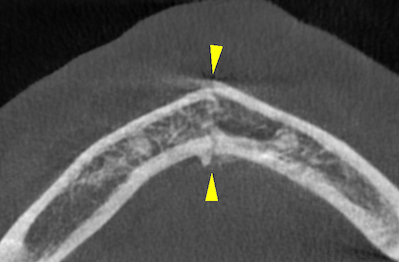